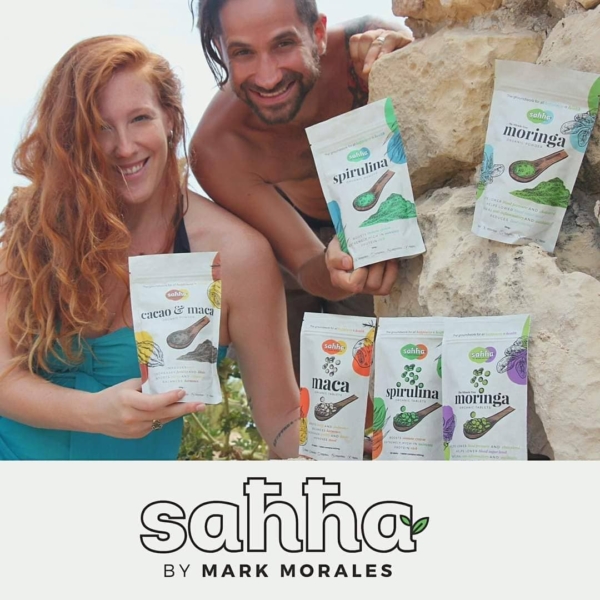 For over a decade now, Mark Morales’ passion for healthy living has inspired him to study, explore, and experiment in order to help people lead healthier lifestyles. He started off as a yoga instructor in Malta but fairly quickly gravitated toward his main passion, FOOD. His first project was opening a small vegetarian café, which quickly made him realise that he does not belong in the confines of a closed kitchen. This experience drove him to find another way to express his passion and cater his message more directly to people. A good friend gave him an opportunity to host the kitchen corner on a television program on TVM. On that program, Mark found how natural it is for him to show and explain to people how to cook for a healthy diet and lead a healthy lifestyle.

At this point, many people started asking for a recipe book, so Mark self-published his first book, I Love Eating Healthy with Mark, which quickly sold over 4000 copies. This success helped him to start cooking on numerous TV shows on a daily basis, and was followed closely by the release of his second recipe book, Do Yourself a Flavour, which was full of easy and healthy recipes.

After starring on countless TV shows talking about his views on education, childbirth and lifestyle, one particular show gained particular traction with the general public. Thus, ‘Ninvestigaw X’Nieklu’ served to transform the general public’s views on food and healthy living. Once a week the host picks a topic and invites guests to engage in healthy debate on that topic. Mark was invited to speak about spirulina, a superfood he had used for many years and included in his recipe books. It was clear that people needed an easily accessible product that would provide high quantities of nutrients to their bodies. In our modern world most people lead especially busy lives and find it hard to learn and adapt to new ways of eating, and Mark’s success in promoting spirulina offered a simple, easy, go-to alternative for people to improve their health. Seeing the positive effects of his lifestyle message at work, combined with the power of the selection of especially curated superfoods he offered, Mark knew he was on to something profoundly important and, as always, he dove into his new project with vision, enthusiasm and conviction.

However, taking the step toward expanding his business in the hopes that he could help transform evermore lifestyles and diets, and ultimately improve public health, wouldn’t have been possible without Stefania. Stefania, Marks partner, started managing various social media platforms, providing daily tips and valuable information about healthy living. Mark and Stefania make a great team, in part because Stefania is also extremely passionate about health and fitness, and her and Mark hold many views on life in common. Mark plays the role of delivering the message through video and television, and Stefania keeps the business and administration organised and professional. Both are absolutely committed to the ultimate goal of SUPPORTING YOU TO FEEL BETTER.

This site uses cookies. By continuing to browse the site, you are agreeing to our use of cookies.

We may request cookies to be set on your device. We use cookies to let us know when you visit our websites, how you interact with us, to enrich your user experience, and to customize your relationship with our website.

Click on the different category headings to find out more. You can also change some of your preferences. Note that blocking some types of cookies may impact your experience on our websites and the services we are able to offer.

These cookies are strictly necessary to provide you with services available through our website and to use some of its features.

Because these cookies are strictly necessary to deliver the website, refuseing them will have impact how our site functions. You always can block or delete cookies by changing your browser settings and force blocking all cookies on this website. But this will always prompt you to accept/refuse cookies when revisiting our site.

We fully respect if you want to refuse cookies but to avoid asking you again and again kindly allow us to store a cookie for that. You are free to opt out any time or opt in for other cookies to get a better experience. If you refuse cookies we will remove all set cookies in our domain.

We provide you with a list of stored cookies on your computer in our domain so you can check what we stored. Due to security reasons we are not able to show or modify cookies from other domains. You can check these in your browser security settings.

These cookies collect information that is used either in aggregate form to help us understand how our website is being used or how effective our marketing campaigns are, or to help us customize our website and application for you in order to enhance your experience.

If you do not want that we track your visit to our site you can disable tracking in your browser here:

We also use different external services like Google Webfonts, Google Maps, and external Video providers. Since these providers may collect personal data like your IP address we allow you to block them here. Please be aware that this might heavily reduce the functionality and appearance of our site. Changes will take effect once you reload the page.

The following cookies are also needed - You can choose if you want to allow them:

This Site Is Protected By
Shield Security →